Look after your world

Before you jump to the conclusion that this next blog post is about British Gas, hold your horses!

Last week saw me attend a seminar on Companies House and what it means to be a first time Director of a business.

The first hour dragged, I won’t lie; but after a fifteen minute bourbon break, I mean, comfort break the Intellectual Property Office took off where Companies House left.

The extent to which trademarks, patents, copyrights goes is mind blowing. For example:

Dunlop have a trademark on the rose smell that exudes from their spare tyres.

ASDA have a trademark on the notion of patting a bottom twice.

It would seem pretty much anything can be trademarked!

When discussing patents, The IP Office cannot accept a new invention that has been discussed with ANYONE! So keep your thoughts to yourself until you step over the threshold of the IP Department.

The discussion moved on to photography and who owns photos in the public domain. The lecturer confirmed the person who took the photo is the owner.

Last year photographer David Slater was photographing in the rainforest. Whilst away from his camera, a monkey took charge of and took a toothy selfie! Who owned this? The monkey! Madness. The meaning of this story is, look after your world and whatever you create (our digital footprint isn’t going anywhere!) David Slater could have bought many monkies by now! 🐒 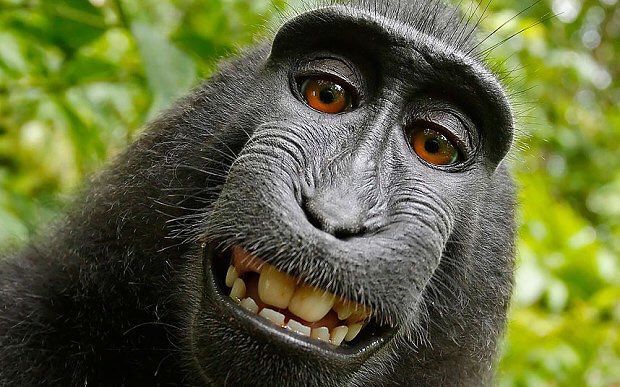