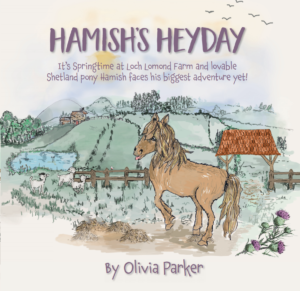 Known for brand storytelling for small business across the Yorkshire region, under Storyteller Marketing, I have just had my first book published and the main character came to me in a dream…

Meet Hamish, the naughty but affable Scottish Shetland pony in this Summer’s must read.

Hamish’s Heyday follows the adventures of Loch Lomond Farm up in the Scottish Highlands. No ordinary farm, the animals here can talk to each other!

After a new pony comes on the scene in the form of bonny Flora, Hamish’s heart is stolen; but when Flora is wounded in the run up to the Pretty Pony competition, will Hamish be able to step up and win the prize on her behalf?

Hamish’s Heyday is an uplifting story, written to both entertain and educate children aged 5-8 years old, using a range of vocabulary to broaden children’s learning and keep the English language alive.

The book is to honour of a bygone era (that of my childhood) and the illustrations mirror this, beautifully created by my elder sister Ibby Harris of Pea and Me

To ensure accuracy, I sought help from Anne Dorsey who ran a riding school just outside of Harrogate for some years. By way of coincidence, I found help in Sarah Walden, a publishing consultant based in Oxfordshire, who it turns out had learnt to ride thanks to Anne, having grown up in Harrogate!

Karen at Noble Words, based in Scarborough contributed in proof reading, making the entire project quite the Yorkshire affair!