Hamish, The Shetland Pony came to me in a dream; I had waited for years for the right character to present itself, so that I could tell their story. This marks my first Children’s Novel. I hope you enjoy his story … 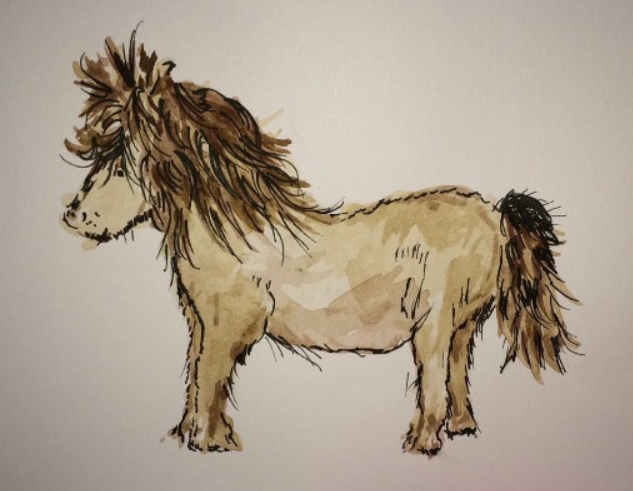 Loch Lomond Farm was placed high up in the hills of Scotland, as far as the eye could see. The farm was owned by Lord and Lady Fitzrovia. Glenn and Jemima to you or me.

Glenn was a tubby looking chap with untidy red hair and rosy cheeks and his wife, Jemima had a pointy nose and was as tiny as a tinker. They both took huge pride in their farm and the farm animals that lived up there, although didn’t always see eye to eye, for Jemima was the bossiest wife in all of Scotland.

The two of them worked hard in looking after their Pigs, ducks and sheep and not to mention Shetland ponies who were stabled right there next to the smelly pig sty. But this was no ordinary stable, in this stable, the horses could talk!

The stables welcomed a new Shetland from the city most recently.

Flora was a tiny, but very beautiful dressage champion pony with a white mane and soft brown caramel coat that most would envy, she was still a little shy around the farm but was settling in to her new home nicely. Then there was Bean – he was a wise old shire horse who spent his time scoffing dandelions and offering advice to all who would listen! The leader of the pack though, was Hamish, a pure bred, brown and white Shetland with an outrageously bushy mane and tail, he was mischievous beyond belief!

It was April and the farms lambing season was in full swing. This meant one thing, it was time for Hamish’s favourite hobby – lamb chasing! He was a naughty boy.

“You are naughty!” Sighed Bean, Hamish’s buddy and the farms oldest shire horse.

“I don’t know what you’re talking about Bean…?!” Hamish smirked, while nibbling on a dandelion.

“It’s that time of year again ol’ boy” Said Bean “I can hear Her Ladyship shrill voice, which can only mean one thing, it’s the run up to the Pretty Pony competition.”

“Can’t they give it a rest? Ponies aren’t for parading around and showing off their manes and tails, it’s outrageous!” Hamish announced.

“Hmmm, not sure Lady Jemima would agree with you there…” replied Bean as he trotted off to the other side of the paddock in search of more dandelions whinnying as he went.

“Point your toes Flora!” Shouted Lady Jemima at the very tiny but very beautiful Shetland by the name of Flora.

“Did you even pick out her hooves this morning Glenn?” forced Jemima at her wilting husband as he entered the tack room.

“Yes, darling. I did it first thing, just like you asked.”

“Righto. I think Flora’s a bit under the weather, don’t you?”

“Five days Glenn. Just five days until the competition and the farrier is yet to fit Flora’s new shoes!” complained Lady Jemima as she combed Flora’s already silky soft toffee coloured mane. Lady Jemima really did have a thing about grooming.

“Leaping lizards, I’ve left the scones in the top of the AGA, do help!” Jemima exclaimed as she ran out of the stable with poor Glenn in toe, missing the stable cats tail by a whisker!

Flora was left alone, she was happy for that, for now her mind could wander to her day-dreams of show jumping!

As night fell over Loch Lomond, Hamish and Flora were led to their paddocks, just some 20 yards from each other. The pair had shared the odd field, and joke over the last six months, since Flora had arrived, but these two were from very different stables.

“What have you done now ol’ chap?!” Bean asked as he licked the last of his lunch off his lips.

“I’ve only gone and kicked our nuts and chaff feed bucket over, all over her ladyship’s new riding boots!

“Hamish. You are naughty!” chuckled Bean.

Flora struggled on, as Amelia raised her whip. Flora’s mind wandered to thoughts of that handsome Hamish she had clocked early on when she arrived at the farm, she wondered what he was doing right now. Probably enjoying the peace and quiet of his paddock.

Just that moment, Amelia lost concentration and rode through a low-hanging tree branch and the two of them went flying in to a large bramble patch.

“Ouch! Stupid horse!” shouted Amelia, as she ran back up to the stables.

Ouch indeed, thought Flora, as she tried to get back up on to all fours, with some difficulty. She was lame on her inside foreleg.

Sometime later, Lady Jemima arrived in her 4×4 and trailer to find a fallen Flora.

” Silly, silly girl. I knew it was foolish to run Pony Club so close to the competition. Oh, my wee pony let’s get you up to the farm.” Humph” replied a fed-up Flora; as Jemima led her in to the trailer and drove up the hill back up to the farm house.

“I just don’t know what to do Glenn, I mean, the competition is days away and the vet says Flora is to rest her sprained leg.” Complained Lady Jemima while organising the feed shed that night.

Pitching the last bale of hay, Glenn turned to say, “This is a longshot, but wasn’t Hamish a bit of a performer in his day?” Lady Jemima snapped “Now is not the time for jokes Glenn. That horses’ feet are large, flat and haven’t seen a blacksmith in donkey’s years!”

Glenn dusted himself down as he walked out of the stable in to the cold night air, “Just a thought dear. Good night.”

That night Flora wasn’t in her stable, wherever could she be wondered Hamish as he bedded down for the night.

Dawn was Hamish’s favourite time of day.  A time when he could play in the farmyard. Up over the oil drum jumps, through the pigsty and around the hen huts, then back to his paddock before the cockerels’ morning wake up call.

It reminded Hamish of his days as a stunt horse a long time ago. Hamish had worked alongside some of the movie greats!

Bean spotted Glenn almost straight away as he entered the paddock on horseback. Hamish nuzzled straight up to his half-open pocket snuffling for sugar cubes or suchlike, but Glenn wasn’t there to give favours…

“Now then lad, I’ve got a wee job for you” Glenn smirked as he took hold of Hamish’s mane. Hamish knew exactly what he was in for…

Hamish had never had such clean hoofs or coat; he was even getting some jazzy new shoes!

He would never admit it, but he was actually quite enjoying being pampered,

“Yes, well this wasn’t the plan Glenn, but I’m sure you understand needs must.” complained her Ladyship as she tugged at Hamish’s bushy tail moving a stray blonde hair of her own off her face.

A turn out for the books

It was the morning of the competition and the smell of wood shavings filled the air. To say that Hamish was nervous would be rather an understatement. Hamish had not been “on show” for, well longer than he’d care to remember.

He had to admit it, he rather liked his new saddle which matched Lady Jemima’s jodhpurs beautifully.

“Hamish of Loch Lomond” came over the tannoy, delivered by a Mrs Dower, the competitions patron with a most magnificent double chin and a Scottish accent to rival, well, Hamish’s.

Lady Jemima mounted Hamish and rode him in to the ring. Hamish put on the performance of his life that day. Nostrils flared, teeth bared, he trotted, cantered and galloped in all the right places and looked most handsome in his new gleaming tack, he even liked his new plaits. It was true to say Hamish had had the time of his life.

After all the ponies in the competition completed their lap of honour, Mrs Dower took to the microphone *crackle “In first place, Lady Jemima’s err Hamish”.

“Oh, marvellous!” Her Ladyship squealed, deafening the judges! She turned to give Glenn a cuddle as his cheeks flushed!

“Me?” said Hamish “Yes, you.” Came a voice from behind. It was Flora

“Flora! I hadn’t seen you there!” “You’re a natural Hamish” “Thank you. It’s not something I’m used to these days. I’d hung up my shoes as they say!” “Thank you for standing in for me Hamish. I think Lady Jemima would have hit the roof if you hadn’t!” Hamish replied, “She would have probably got Bean to do it!” They both roared with laughter!

Words included as per English programmes of study: key stages 1 and 2 (department of education).

Theme – don’t judge a book by its cover